Ever catch yourself before you make a mistake? The way you bring your hand up to your chest or head and say “Wow, I’m glad we didn’t do that, what a mess that could have been!”

Every year we almost go downtown to one of our favorite restaurants- The Fish Market or Dublin Square, for example, during the second or third weekend of July. Almost. We always smack our foreheads and realize that we have narrowly avoided the utter chaos of Comic Con.

This year, however, we finally braved… The Con.

Saturday we trollyed on down to the Seaport Village stop and for the first time, walked around to see the outstanding activities going on for the official pass-less masses.

What a hoot! Be warned: this is NOT an event for the claustrophobic…

Like “Outlander?” Here’s a hoard of Scots and such, hired by Starz Network to make a lot of noise for the series- 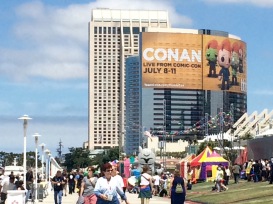 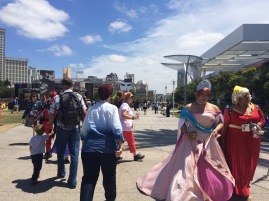 Here’s a couple of views of the waterfront and hotels near the San Diego Convention Center. People are lined up to get into the Hall H panels for  Sunday already, there is some big dance party going on aboard a yacht, more cosplayers than you can shake a light saber at, and a plethora of goofiness to see all the way to Seaport Village.

This El Cajon cosplayer won. Hands down, she and her husband made the best costume I saw. She rocked her Steam Punk tricked-out mobility device, don’t you think?

Lots of other cool sights to see-

This is a pretty cool shirt associated with Stephen Amell’s (of “Arrow” fame on CW) Sinceriously fundraiser. We saw a lot of these shirts. Click on the picture to be linked to information about “Stand for the Silent” and “Paws and Stripes.” Anti-bullying messages and pets for the troops are the main focus there.

Sunday is Family Day down by the Convention Center. Get down there for what I’m told is the best of the best costumes worn by the tens of thousands of fanboys and fangirls. Take the trolly for the easiest commute!