All Costco’s Kirkland brand drinks seem to be great- the wines, the liquors, and now… how about this Irish Cream Liqueur? Into the cart it went since I couldn’t pass up the possibility of a good drink.

We have since tried it, and the Kirkland Irish Cream Liqueur is a winner! On ice and in coffee, The Husband and I have loved it. The Bunco Club has indulged and gave their approval, but the level in the bottle has still barely dropped.What am I supposed to do with an enormous bottle? It’s time to experiment because this is a seriously ridiculous amount of booze…

How about brownies? Yum.

Into a large bowl put:

Prep bowls with vanilla and coffee

coffee into the vanilla 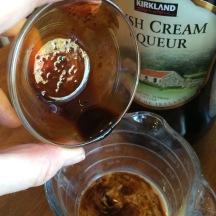 coffee and vanilla into the liqueur

Mix together in a small bowl or measuring cup:

Beat together in a medium bowl:

Stir together the liqueur and egg mixes, then slowly add all the liquid mix into the large bowl with the instant brownie mix. Add in chocolate chips now, if you are using them in your recipe. Stir until combined, but don’t over mix. 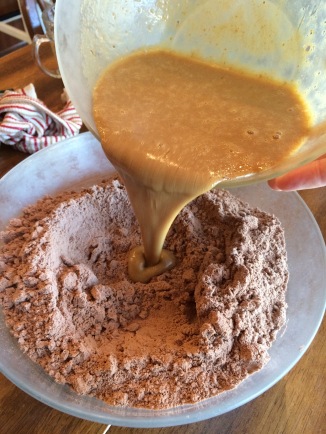 all the liquids go in

Pour batter into prepared pan. Follow your usual baking directions, and in about 25 minutes you should be in Brownie Bliss!

I need about a half gallon of milk right now, or maybe a big mug of black coffee… or two. I just tasted my brownie concoction and WOW. Very sweet, but Very good. I think that the brownie mix could have stood another tablespoon or two of liqueur, as the batter was not only more stiff than when usually made with water, but also- the Irish Cream Liqueur flavor is pretty mild.

-I used my family’s favorite boxed mix as a base and added my not-so-secret ingredients (instant coffee, vanilla, and chocolate chips). Remember, if you are going to use instant coffee crystals to punch up the chocolate flavor, you must add the dry coffee to the water/vanilla/liqueur and NOT directly into the batter, or they won’t dissolve.
-If you mix together all your liquids before stirring them into the brownie mix, you are much less likely to over mix the batter.

Ever hear that if you slice your brownies with a plastic knife, that they will slice more evenly and not get all ragged? Well, it is true.

Yep. It works, slice up your brownies with a plastic knife from now on, everyone! 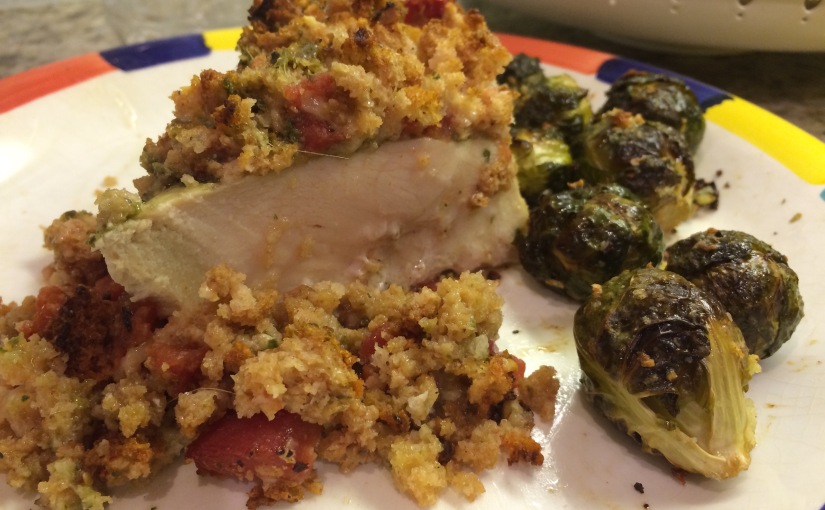 Here’s a great recipe to try. It’s great because it is forgiving.
Italian Chicken and Stuffing Bake from the food site LifeInTheLofthouse.com

It’s perfect for illustrating all the reasons why a recipe can go wrong… like, if someone feels like swapping ingredients and decide to not follow certain/most instructions, for instance. Experienced cooks, comfortable in the kitchen, should be able to monkey around with ingredients and directions. Experienced, comfortable cooks also get to botch things up, too. Also, someone would have liked to have posted this yesterday (New Menu Monday), but someone’s son monopolized the desktop all evening for an “I swear, I’ll be done in ten minutes, mom, it’s easy” assignment.

If you decide to use four enormous whole chicken breasts, not chopped, swap a different kind of stuffing mix instead of the typical national brand, add the cheese in the wrong place and you will have to cook everything for twice as long as the directions, you might have some issues.

But, these are good flavors that go well together which stand up to Scattered Home Chef Syndrome… something I seem to suffer from. Yep.

Here’s what I did to mess up this recipe:

I thought I would try this trick for peeling garlic that I have seen demonstrated online a lot lately:

Scroll down to see the results!

I find it more efficient with no more dirty dishes to just whack the clove with the flat of my kitchen knife- the peels slide right off the cloves, and your garlic is also on it’s way to being chopped up.

SeriousEats.com is one of my go-to web sites for anything in the food and cooking world. I love, Love, LOVE their test recipes, food tourism articles, product reviews… love it all.

One of my favorite contributors is J. Kenji López-Alt and his “Food Lab” articles are kitchen chemistry at its best… my favorite type of food reading. Tonight I tried a recipe he worked on in detail five years ago- “Fresh Ricotta in 5 minutes or Less.”

Maybe doubling the recipe put things out of whack? Might the larger volume of milk thrown off how long the milk should have been brought up to the specified 165 degrees? All I know is, more than double the microwaving time wasn’t the only issue. The milk initially started coagulating just fine, but then the mass of curds just fell apart.

From four cups of whole milk I netted about half a cup of ricotta curds. And a kitchen that smelled distinctly of baby barf. You fellow parents know exactly what I mean.

I am not finished with you, oh Great Stinky Experiment, if Kenji says I can do this, then, by gosh, I CAN! I will repeat this soon… very soon.