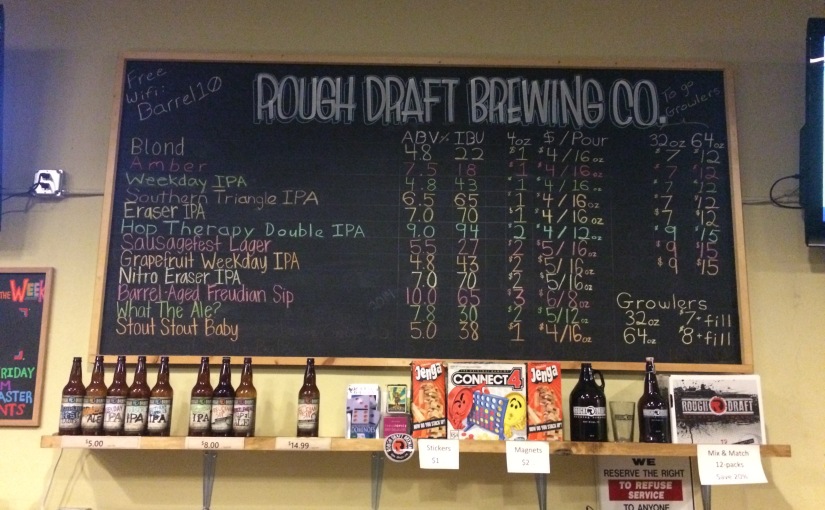 Tough day in this ol’ world of ours. And yes, I know that this is a gross understatement.

Having visited Paris and other parts of France (I was a French and Spanish teacher before staying home with my children), I spent a lot of time glued to the Twitter feeds and news channels today. Like the rest of the sane world, I am horrified.

I pulled myself away this evening to visit a new brewery tonight like I have been able to do every night for the past week. I enjoyed sitting with my husband at the bar in the tasting room of Rough Draft Brewing Company, drinking a stout while he enjoyed his IPA. The universe inside this brewery was normal, right down to me not liking his IPA at all, and me finding a stout that was full of flavor with very subtle hints of coffee and vanilla. All was well, all was normal.

Please join me and offer prayers and work for peace and answers for the world outside this little brewery in San Diego.

In Miramar, Duck Foot Brewing Company is tucked into a small strip mall amongst office buildings and warehouses. I bet the people who work in the offices nearby are oh, so happy to wait out an evening’s rush hour in Duck Foot’s tasting room playing with the assortment of games, beer in hand (Rock ‘Em Sock ‘Em Robots or Apples to Apples, anyone?). One of the most unique things about  the brewery is that the beers are gluten free. Yes, gluten free. One of Duck Foot’s co-founders with Celiac disease came up with a way of removing the gluten from beer. Got gluten issues? This is your place.

Sitting next to The Husband, and ready to go home as soon as I stopped asking him questions, was Duck Foot’s head brewer, Derek Wasak. I asked Derek how he was able to make the Chocolate Hazelnut Porter a lighter stout. It had the nice chocolatey, malty, deep flavor of the stouts I have been tasting this week, but it wasn’t so big and heavy. He said that was the secret. Phooey. Who cares if he won’t answer, it was great!

I was surprised that I liked The Husband’s beers, his Double White IPA in particular wasn’t a stabby assault to my mouth. Derek explained why- for an IPA, the Double White is malty, and brewed with wheat giving it a more balanced flavor than our usual San Diego style IPAs.

We have several friends ready to come back here with us. The Husband has already said that he thinks this is his favorite spot we have visited. Duck Foot’s tasting room is large, with lots of stools and tables. Tonight a couple of scientists- grad students from UCSD and the Fleet Science Museum, were hanging out, a sign between them announcing they were there to answer your general science questions. How’s that for a great idea to make science approachable? A counter full of various games is available to share with old friends or new people you just met, and a food truck is often out front serving up snacks. Duck Foot Brewing is the place to sit and enjoy the beers and the people. 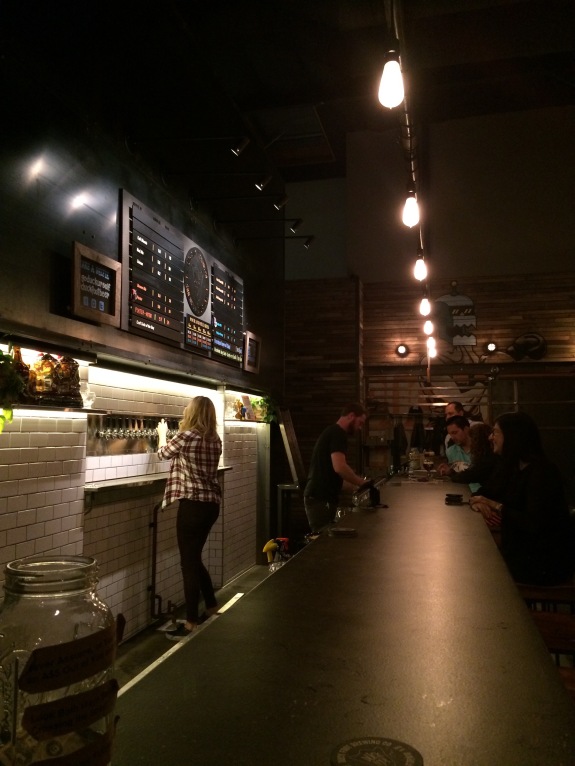 In the crosshairs today: Alesmith Brewing Company in their brand new Miramar tasting room. The Husband is quite fond of The Alesmith. 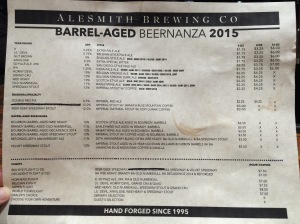 Not only did I really like my Beer Geek Speedway Stout, but I surprised The Husband by OK-ing of his drink, too- the Anvil ESB. I remember going to tastings at Seattle’s Redhook Brewery years ago. On their tour the guide would pass around jars of toasted malt, all of varying depths of roastiness. I loved the toasty, coffee-like aromas of that grain, and thought it was too bad that all those hops were added to ruin their ESB. Hops have been an acquired taste, that’s for sure, 20 years in the making.

These two selections from Alesmith are great choices- one full of heavy, roasted goodness, the other toasty, malty and light in comparison. Two more beers for me in this Triple and Quadruple-Hopped market.

With a food truck outside on the patio and a spacious interior, a person could quickly get used to killing quite a bit of time here… This facility is so new that the building looks to be only half furnished. But what is here is comfortable. 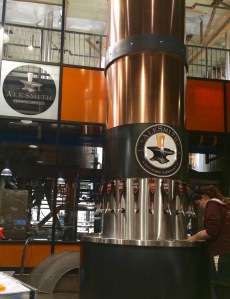 Green Flash Brewing Company‘s collaboration with Alpine Beer Company put a big smile on The Husband’s mug. Now he doesn’t have to drive up to Alpine to enjoy what he identifies as his overall favorite San Diego brewery. High praise from a guy who loves his San Diego style IPAs.

I’m still on my quest to find beers that I like, still amazed by the fact that I do like beer… it’s just the hops that I never cared for. So on my inaugural visit to Green Flash in Sorrento Valley, we found Captain Stout and I’m here to say that I loved it!

I also love that I can get small pours instead of half pints. I’m small, a lightweight, and am quite obnoxious sober… no need to add much alcohol. Really.

After a mighty busy couple of weeks of people moving and school craziness, I’m back on my blog, yea! I really did do something new every day, even when moving The Girl into her dorm room out of state- If you don’t think that counts as new enough, just know that I’m still not quite ready to talk about it very much. It is a powerful phase to transition into, I gotta say. Blogging about committing to try new experiences daily was one of the smartest things I have done recently.

As for Green Flash, I’m looking forward to touring the brewery soon. 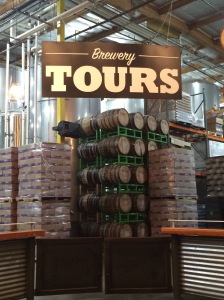