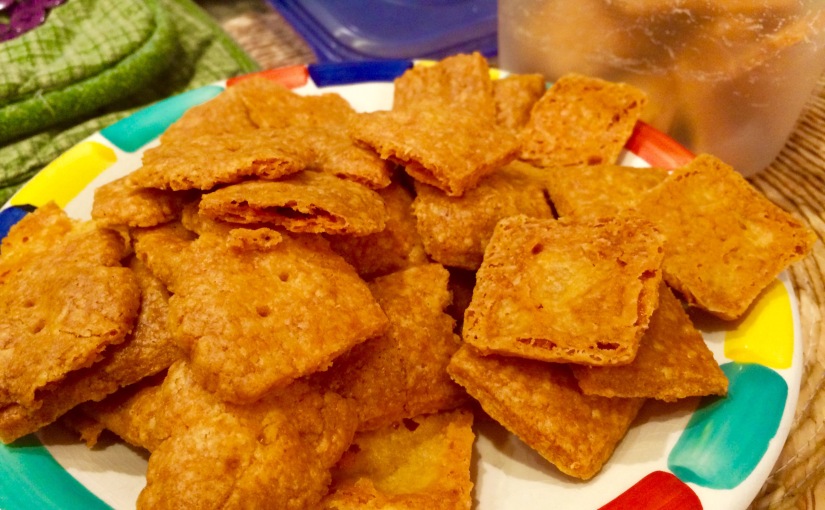 Thought I’d try a recipe that I’ve had for a while, one for home made cheesy crackers… kind of like Cheez-its. My kids love those crackers and whenever they eat a lot of something, I like to see how a home made version might turn out. ChewOutLoud.com had a super simple recipe- four ingredients: cheddar, flour, butter, and salt. That’s it. I didn’t want to mess with a lot of ingredients or kitchenware with this crummy cold I have, but I’ve been bored with just TV and reading, I needed to create something. And of course, I had to make a few changes, so my recipe follows-

Put all the ingredients into food processor bowl, and blend until the dough starts to come together- 30 to 60 seconds. Don’t overwork the dough, think of it as a cousin of pie crust and if it mixes too long the crackers will be tough.

Flatten dough into three disks, wrap in plastic and refrigerate for at least an hour.

Roll out the dough disks one at a time to about 1/8th of an inch thick and cut into squares of approximately one inch.

Place on baking tray, and poke the pre-crackers a couple of times with the flat end of a skewer (optional), and bake at 350 degrees for 15-20 minutes, until they start to brown lightly.

These were really tasty, but I think I still overworked the dough- 30 seconds was probably all the mixing it needed. Also, they are unbelievably greasy, until you think about how much cheese and butter there is to so little flour. Probably why they are so tasty, too!

If you have young kids, you really ought to try this recipe or a similar one. I bet they would really enjoy making their own cheesy crackers! Mine came out less crispy as store bought crackers, so I put them back in the oven for a bit longer- if you do this, watch out, they brown very fast.