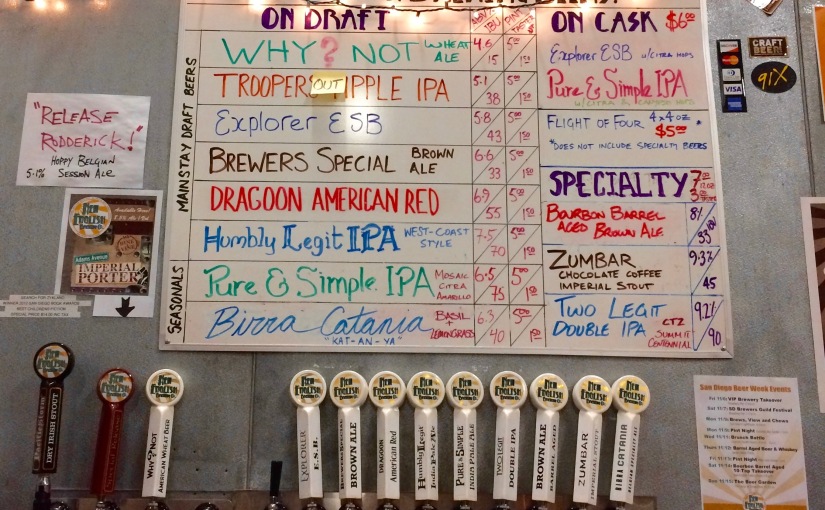 It was only a short time ago someone suggested that I try a pint of Ballast Point’s Sextant Oatmeal Stout (on nitro!). Beer? I was skeptical, to say the least. I’ve had sips of The Husband’s brews for nearly three decades, why would I want to try yet another sip of what I used to describe as carbonated soy sauce (the dark ones) or a bitter cross between pine needles and lemon peel (the San Diego IPAs)? 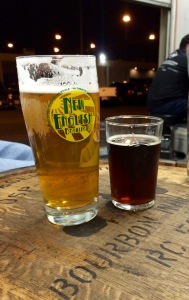 I tried it. Whammo! A stout fan is born.

Here I am, a few years later, and I find a second beer that I like as much as my favorite oatmeal stout- New English Brewing Company’s Bourbon Barrel Aged Brown Ale. Holy Cow and a Heeeeey Macarena we have another one! I know that coffee pairs well with malty, heavy, dark beers, but put it in a barrel that was once home to bourbon? What a great flavor combination. 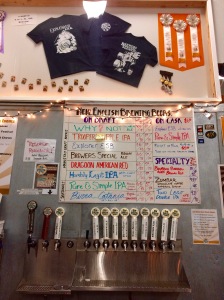 Liquor can taste about as smooth as rocket fuel- you should always follow my father’s advice: “Don’t drink cheap booze.” Even a good scotch tastes like an old campfire to me. New English’s brown ale aged in old bourbon barrels gives the rich, full ale all the fabulous flavors of the liquor with none of the chest hair singeing fume-like punch in the throat quality of your Old Man’s drink. 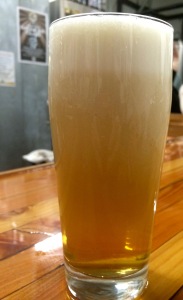 To top it off, I didn’t hate The Husband’s IPA- the Humbly Legit West Coast Style IPA. This is a sure sign of the Apocalypse, you know. Look it up. I kid you not.

And I haven’t even mentioned their Zumbar Chocolate Coffee Imperial Stout. This is the same Zumbar, our ultra-favorite coffee shop, which you can walk to from the New English tasting room. I already know that brew is good- we just happened to be getting coffee at Zumbar one weekend morning when New English was offering tastes of this stout at the coffee shop. Talk about being in the right place at the right time.

Pull up a barstool in the big main room with the taps, sit in the smaller room with squishy seats, but get down here to Sorrento Vally Road, kind of between La Jolla, Del Mar and Sorrento Valley. Eat something first, buy a bag of Doritos at the bar, or double check the website to see if a food truck will be at the brewery when you visit, but do visit. 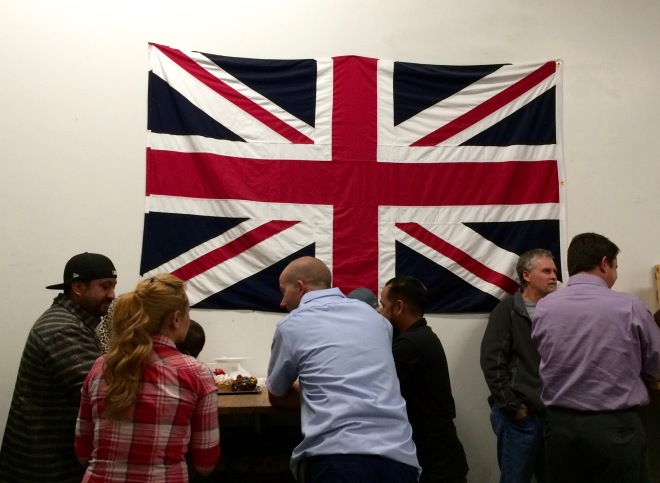