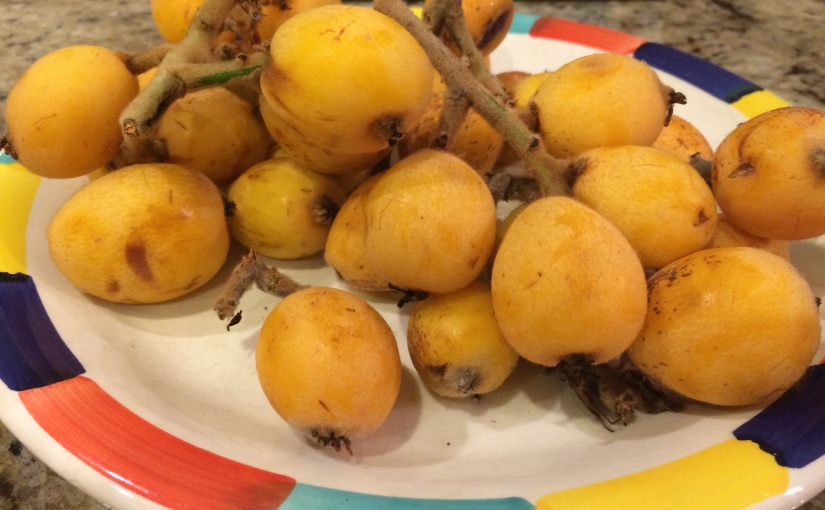 I met Richard when we lived in Indianapolis, when he was on a business trip to work with The Husband. A Chinese native, he said we should just use his American name, “Richard.” I remember joking, “Richard, huh. If that is your real name…” and this is how we have referred to him ever since.

Richard (if that is his real name) has a loquat tree, like just about every Chinese person in my neighborhood. They grow like weeds in the San Diego area. I didn’t know these were loquat trees until last week, when he sent some home for us to try, with me saying “So THAT’S what all those trees are.”

We were brave enough to try these tonight, after looking up a little info online. I stumbled onto Lisa Rawlinson’s blog Full and Content, where she has a boatload of information and recipes about loquats. Some of it is pretty funny… I like her sense of humor. That’s where I read about arsenic in the seeds. I’m surprised The Boy tried a loquat after learning this fact. A little further investigation on the Purdue Extension website, explained the amount is not enough to cause concern. But I didn’t tell him… a mom gets to have fun scaring her kid occasionally, and he’s getting harder to bluff. Teens can be pretty skeptical, sheesh.

This usually never happens, but all three of us liked these. We decided to peel them- no blanching, no problem, the peel slipped right off. We decided that loquats taste almost exactly like pears, with similar texture even. I wonder if they would be good in smoothies? That’s what I’m making everyone eat for breakfast tomorrow since I have too many over ripe bananas occupying valuable space in the freezer. No loquat seeds will be added, I promise.