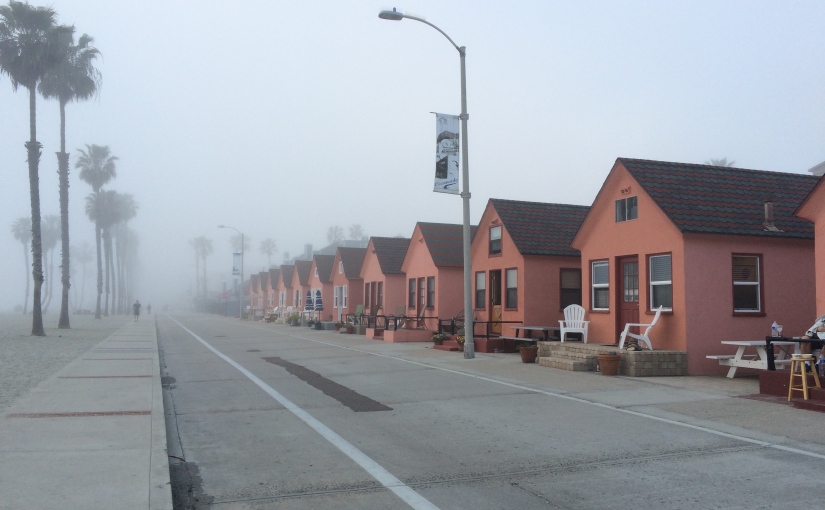 It’s getting difficult to get the four of us together for a tourist day. Between college and high school entrance requirements we are more scattered than ever.
Plus, the half hour ride in the car to get anywhere means 30 minutes of butt jokes coming from the back seat.

Aside from bringing The Girl to her friend’s house in Oceanside (pre-licensed teenager days), the only thing I associated with this city was a long drive down the coast to my great-grandparents condo when my brother and I were younger. We had nothing to do but read the books we brought along. Our other option was to slip and slide down a long iceplant covered hill, cross a highway and buy candy at a 7-11 mini mart. When the great-grandparents’ health began to fail, I don’t remember helping out with any of moving or cleaning… we were probably just under foot while others took care of the work, but then again, we were just flaky little punks back then. My brother did a complete turnaround not long after that, and since then he’s the one the family can count on when the older family members have needed anything.

Today we spent the afternoon driving through beach towns before arriving in Oceanside. We walked to the pier with the sun in our faces only to have the marine layer roll in by the time we reached the end of the walk. After five days of Santa Ana conditions, I was in heaven! My kids played on the boardwalk like I did decades ago. They loved seeing the sand underneath give way to the rocks then the waves. We snapped pictures of birds waiting to snatch the catch away from people fishing on the pier. I busted them before they could spit on the surfers below. Fourteen-year-old boys are such… fourteen-year-old boys. Especially when egged on by the big sister.

“OK, now we don’t have to go to Oceanside again.” That was The Husband’s observation.
He prefers the Encinitas, Cardiff and Del Mar scene.